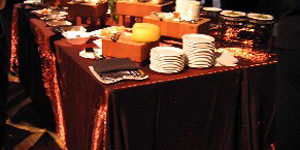 Yesterday, hundreds of guests gathered together at the Santa Clara Convention Center to see the unveiling of their new ballroom: Mission City Ballroom. This new ballroom boasts 22,400 square feet and is very versatile with multiple configurations, whether it be an event for a meeting, dining etc.

The Stuart Rental Company had the privilege of providing the specialty linen rentals for this amazing event.  Which also means, I had the privilege of attending this great event. Before the unveiling occurred, we got to hear from some of the people who were involved in making this happen It was quite eye opening for me to hear how much time and effort went into this. Usually, you just see the outcome, but you don’t realize how many people were involved and how much work it took.

Two other things really struck me as I heard the speakers:

Now, on to pictures of the event. Vice Mayor, Jamie L. Matthews, had the honor of cutting the ribbon and unveiling this fabulous new ballroom. With him on the far left is Steve Van Dorn, President & CEO of the Santa Clara Chamber of Commerce and Convention-Visitors Bureau, who also served as the Master of Ceremonies that night. Jennifer Sparacino, the City Manager standing to the right of the Vice Mayor, was also one of the speakers of the night. 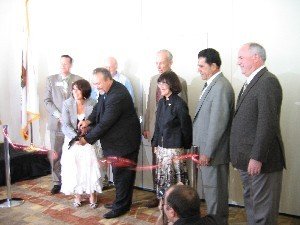 They definitely had the “wow” factor when they first opened the doors into this new ballroom. The picture doesn’t do it justice. 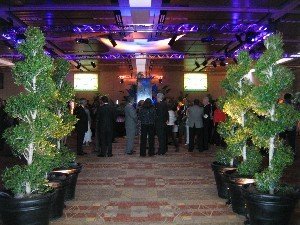 They had many different food stations, some with their own chef cooking the yummy food. Our Crushed Iridescent Steel linens look great.

Our Crushed Iridescent Copper linens look so good under the lighting at this food station. The food doesn’t look too bad either. 🙂 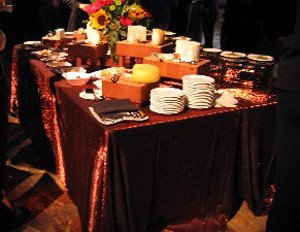 If you’re looking for a great place to hold your event, try Santal Clara’s new Mission City Ballroom. If these pictures don’t convince you, you should definitely try their food!

Request a Quote or Free Consultation

With an ever expanding inventory, Stuart's expert planners can save you time and money by quickly finding just the right rental products for your next event!

The Stuart Rental Company’s highest priority is the health and safety of our team members, clients, and their families. Therefore, we are taking this opportunity to set forth how we are managing our business operations during the COVID-19 pandemic.

We will continue to update our policies as we learn more from the medical and scientific community, including new information from the Centers for Disease Control and Prevention. We encourage everyone to frequently refer to the CDC website for the latest on how best to contain and mitigate the impact of the virus.

OUR SHOWROOM IS OPEN

We have enhanced the process and increased the frequency of our equipment cleaning, spending extra attention to regularly contacted surfaces.

We are keeping our teams current on all recommendations and updates from the CDC as well as instituting new safety precautions for the pickup and delivery of any product.

We are committed to doing what is necessary to curtail the impact of COVID 19 and will therefore update these policies as the CDC and local and state health officials issue more guidance.

CLICK HERE TO LEARN MORE ABOUT STUART’S SOCIAL DISTANCING SOLUTIONS FOR YOUR NEXT EVENT!